Art & Optics - The Hockney/Falco a Thesis

In 2001 the celebrated painter David Hockney published his book ‘Secret Knowledge’, in which he outlined his controversial theory that various painters of the Renaissance used optical devices to project images of their subject from which they then traced their compositions.

Williams believes that many of the inconsistencies that can be identified in certain paintings often arise during traditional picture making, but have been misinterpreted as evidence of optical use. Williams’ empirically-based views are derived from studio practice and working exclusively from life. Some of the points raised by Williams are covered in his essay Studio Practice And The Hockney/Falco Thesis, first published February 2002.

The first independent scientific analysis of Hockney’s theory was carried out by imaging and optics Dr. David G. Stork. His comprehensive research questions many of the claims made by Hockney and thin-film physicist Charles Falco.

One area of Dr Stork’s research focuses on the chandelier depicted by Jan van Eyck in the painting ‘Arnolfini and His Wife’ (1434), National Gallery, London. Hockney and Falco claim the chandelier is in perfect perspective, suggesting this could only have been achieved if traced from an optical projection. “To test their assumption, as part of our research”, explains Stork in his paper ‘Did the great masters use optical projections while painting?’ Williams was asked to paint two complex chandeliers by eye alone. 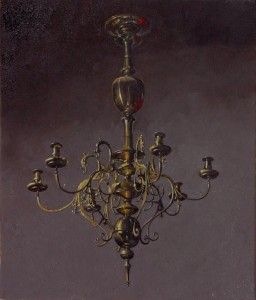 “Chandelier II was painted entirely ‘by eye’. Our analyses show that it has better perspective accuracy throughout than the Arnolfini chandelier.” Dr David G Stork.

“Our perspective analysis applied to this painting” (Chandelier II), continues Stork, “resulted in a good but, as expected, imperfect alignment of arms. The average measured deviation was about 8.55 % the image width, of the same order of magnitude as that of Jan van Eyck’s chandelier. This experiment confirms that realistic-looking structures can be painted mainly by eye without the help of optical tools of any sort.” 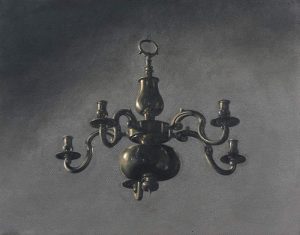