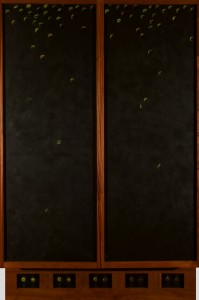 The painting is the centre piece to a cycle of works (1999-2004) examining  desire and pursuit. The cycle shared elements of Williams’ previous project, Adoration of the Sea (1995-1999) that explored the human need to mark and celebrate events and featured aspects of spurious ceremony.

The painting has been exhibited at Royal Cornwall Museum, Truro, Cornwall; St Mary-le-Bow, London; St Mary’s Cathedral, Edinburgh and Liverpool Cathedral for the opening of the European Capital of Culture. 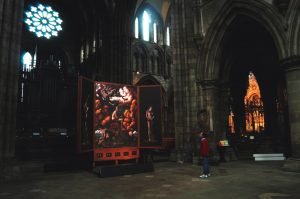 Excerpt from the 2004 exhibition catalogue. An introduction by Ian Dejardin, director of the Dulwich Picture Gallery.

Which leads me to the extraordinary triptych that is the climax of the cycle, and the show. A triptych……Williams has exploited this form for his own ends and produced his own quasi-religious icon, bringing together in a moment of grand revelation all the themes of his remarkable cycle. On the outer doors, a miraculous shower of apples falls. In the predella below, they appear as trophies on stakes, and their process of decay unfolds from left to right. When the doors open, the inner doors contain two figures where interceding saints would be in Rubens or Van Dyck; these are a man and a woman, dressed in the familiar garb of Williams’s seekers, i.e. practically naked except for velvet loincloths. He has a pick; she a spade. He is active; she is meditative. The central image, the great altarpiece of the cycle, contains one figure we certainly recognise – the black man from Searching III, stretched out (dead?) at the base of a rocky pile on which seats an older man holding the stoppered jar we associate with the searcher who has reached the ‘contentment following attainment’. All the complex lines of this dense composition seem to lead to his disturbing stare, which directly involves us as witnesses of the mystery. Another man makes the familiar offering to his little portable shrine; a woman stares to the horizon. Then, most amazing of all, reclining on the clouds above, three naked figures, two female, one male – angels or goddesses? The male figure reaches down towards the seated older man, as if reaching for the man’s jar, thereby possibly triggering the cycle of desire and pursuit all over again. And all of this is played out against a distant, serene landscape over which billow sulphurous clouds of surreal beauty.

Mysterious? Certainly. But beautiful and astonishing also: a quasi-religious experience for an irreligious age.