As a figurative painter I welcome David Hockney’s exploration into the use of optics by the Old Masters. I accept that certain artists such as Canaletto and Vermeer may have used optics to some degree, I can also appreciate the role a camera obscura could play when trying to plot a very intricate object (although a little over-complicated). However I feel Hockney’s theory (which is mapped out in his book ‘Secret Knowledge’) is too broad in its scale and is misguided in including artists such as Caravaggio. It is essential that many aspects of the theory be challenged or at least subjected to a wider and more rigorous debate otherwise it will only help to erode the importance of direct observational drawing and painting, the real foundation of Caravaggio’s works. The lack of conclusive contemporary written evidence will I hope be taken up by scholars and historians. As a painter who endeavours to work traditionally I question many of the practical points of the theory and their implications, particularly in reference to Caravaggio.

Caravaggio did not use optics. He may have owned mirrors, as an inventory of 1605 states. He may also, through his patron Cardinal Del Monte, have had contact with men of science who could have introduced him to the magic of the camera obscura. But it is a massive leap to make from these few historical notes to one that bases his whole working practice upon optical projections.

Hockney’s conclusions appear to dismiss the collective details that go into traditional picture making based on direct observation. He has instead interpreted some of the imperfections that can arise through the results of traditional practice as evidence that the artists used optical devices. For instance Hockney notes the fact that many of Caravaggio’s works are constructions of various viewpoints ‘collaged’ together. This, he believes, was because Caravaggio was using a lens-based system of projection, requiring the artist to compose his works in a piecemeal fashion, since the lens only provided a ‘hot spot’ of focus at any one time. This makes sense of course if you are avidly searching for traces of optical use, but it ignores the fact that when working from life many complex compositions are also amalgamations of various viewpoints due to a practical necessity, then fused together to give the impression of a single viewpoint.

For Caravaggio to lay out his ‘The Supper at Emmaus’ (N.G. version) he would have needed to have set up at least 6 feet back to be able to view the scene as a whole. Then, in order to paint the portrait details and still life elements with such clarity and precision, he would have had to reposition himself and move forward at the same eye level. By doing so all his visual angles in relation to the original set up would have become more acute. If this is not compensated for irregularities will occur, especially if working direct and without preparatory studies. Some of the irregularities that are present in Caravaggio’s work are precisely the result of the explanation given above.

Another practical factor which also dictates the repositioning of the painter or subject is canvas size. For example, a canvas at least 5 feet high offers only a certain amount of comfortable working area if an artist is working on a subject from seated eye level. From this height it is not possible to work on the upper limits of the canvas even if it rests on the floor. So in order to do so it becomes necessary for the artist to raise his own position thus altering his eye level. To facilitate this change the subject has also to be raised accordingly. Although this sounds simple enough it is not always so straightforward when dealing with group compositions. Along with a loose application of perspective it is perhaps one of the main contributing factors that can make a figure look awkwardly placed or appear to ‘float’. The study of these practical details can make dull reading but together with working too close to the subject and human fallibility, they are all crucial to the understanding of picture making. If not catered for they can lead to irregularities and eccentricities of either form or space. Hockney’s thesis either ignores or omits them from the process, preferring to see their effects as traces of optical use and the adjustment of a lens, or canvas.

The theory’s misplaced emphasis is revealed again when we are told that a projection would be a valuable aid when trying to re-pose a model after breaks. This is such a minor benefit it would certainly not outweigh the trouble of trying to compose your subject upside-down, often in reverse and in near darkness (see video – note the ease in which the model takes up his pose after a break. Nor does it matter that a projection would enable an artist to map out difficult and strenuous poses more rapidly since the model would still have to adopt the pose for the duration of the painting period. The artists would have been resourceful when it came to setting difficult poses. The models for the two angels in Caravaggio’s ‘The Seven Acts of Mercy’ could have been studied from above, the left one leaning against the corner of a room. Alternatively and perhaps more likely (because it would have been easier to control the light direction) the canvas would have been tipped on its side and the models would have been painted lying on their backs on a table, with their arms supported by poles or ropes from above.

Like most artists of his day who were particularly gifted and highly trained from a young age, Caravaggio would have seen the restrictions in using optics and would have continued to rely on his ability to draw. Hockney is not convinced of this, believing that only with the aid of a lens could they possibly have been able to make such great works. This is made apparent by his letter to art historian Helen Langdon published at the back of his book. Hockney makes a judgement from our own time when life drawing is no longer the focus of study and when the photograph has become the standard tool for many representational artists. Herein lies the critical difference. Only by consistently drawing form life can one possibly hope to get close to some of the artists of the past. During the process of analysing and transferring the three-dimensional subject onto a flat surface, an artist is confronted with a huge amount of data. Through a series of decisions both conscious and subconscious the most relevant points are recorded and expressed. The three-dimensional subject also presents a whole range of difficulties that need to be resolved. This part of the process increases the artist’s learning curve. Working from a projection (or a photograph) does not raise these difficulties since the subject has already been reduced to two dimensions. Less information is available and instead of an active enquiry there is the temptation to merely copy. (I refer here to representational realist painting only, that which is concerned with retaining the human stamp, rather than photorealism or the creative use of photo-reference).

Using optics can also deprive the artist of a vital part of the painting process. An observational preparatory drawing, or the initial loose marks that lay out an image, supply the artist with the first hints of what is important. This early information becomes increasingly valuable as the painting progresses.

Hockney asks ‘How therefore did [Caravaggio] make such complicated compositions without any mistakes or corrections?’ The answer is he didn’t. As X-rays of his painting ‘The Martyrdom of St Matthew’ testify. It is quite possible that he occasionally made preparatory sketches that simply did not survive (two of his contracts required them). But the extensive revisions in ‘The Martyrdom of Saint Matthew’ reveal that most of his decision making took place on the canvas. Vincencio Carducho wrote in his Dialogos de la pintura of 1633 that Caravaggio used an ‘unheard-of, and outrageous technique of painting without any preparation with nothing but nature before him’. Working directly is far quicker and less laborious compared to enlarging and transferring studies. It would certainly have suited what we know of Caravaggio’s impulsive personality. Single figure compositions tackled directly can be relatively simple but with group studies it can prove enormously difficult to control the scale of the figures in relation to each other. This can create pockets of figures fighting for breathing space. The score lines which are present in some of Caravaggio’s works are also part of working direct. To be able to visualise the image and to initially group the models a basic guide is required. A washed line is one method, but is of course lost once the first layer of paint is applied, whereas a scored line will provide a guide for considerably longer.

Hockney talks about a way of seeing and tries to discover when it was that artists became interested in capturing what he refers to as the ‘photographic look’. This, he believes, took place between 1420 and 1430, coinciding with the development of optics. Any future research into this area must surely include the beginning of the widespread use of oil paint and its potential effects, as well as the transition from craftsmen to artists and the competitive and pioneering attitudes this must have aroused. 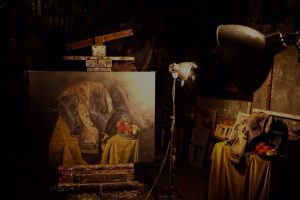 Unlike Hockney, I do not believe the projected image played a role (in the studio). When the Caravaggisti visited Rome to see Caravaggio’s individualistic paintings was it the ‘photographic look’ supposedly aided or inspired by a projection that excited them or was it his astounding naturalism and dramatic and telling use of chiaroscuro that directed the eye and charged his street wise models with spiritual or emphatic appeal. A projection like a photograph is a secondary source. They contain less information than scrutinising nature itself. Why, during the greatest period of painting and when observational drawing was at its peak, would artists turn to optics when the primary source was all around them?